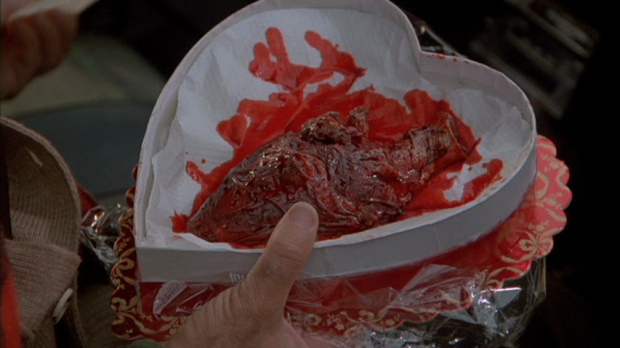 It’s February, which can only mean one thing: Valentine’s Day. Between all the chocolate and the candle light dinners, surely there is more to this “holiday” than just saying “Love is in the air,” right? If you think like me, and go with the literal approach, nothing says “you have my heart” more than your dearest enemy’s heart in a heart shaped box [see above] with a nice card to go with it. But what kind of card could go with something so..messy? Luckily for you, I have you covered – with some lovely [serial killer themed] Valentine’s Day cards, that you can actually buy! Before I share the cards with you, the horrific theme here is somewhat appropriate given the holiday’s true dark origins. In ancient Rome, during the dates of February 13th to 15th, the Romans celebrated something they called “The Feast Of Lupercalia.” During this time, the Roman men would sacrifice both a goat and a dog, followed by whipping their women with the hides of the animals they had just killed to.. well, show them how much they cared.. remember, the Roman women were okay with this, because they believed this would help in fertility! Don’t worry if this all sounds strange to you, because it definitely sounds strange to me. Now, shall I show you these killer cards? I suppose nothing says “I love you” like a man who cuts up bodies and saves their heads in his fridge.. right? 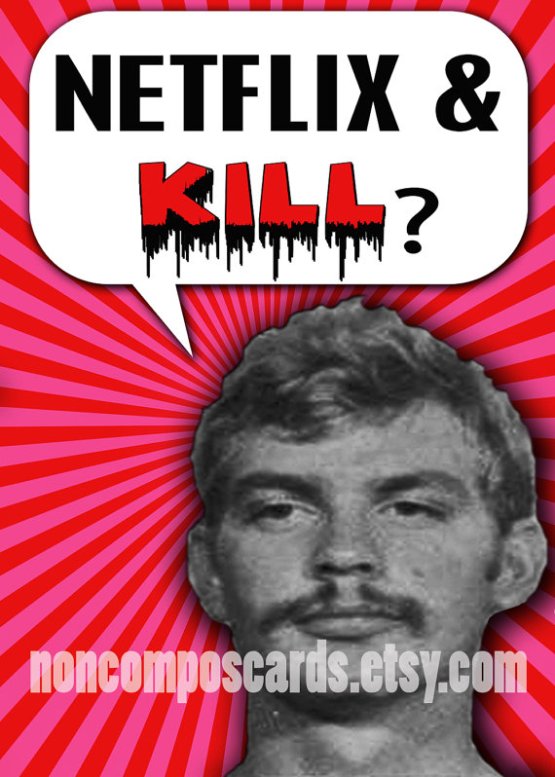 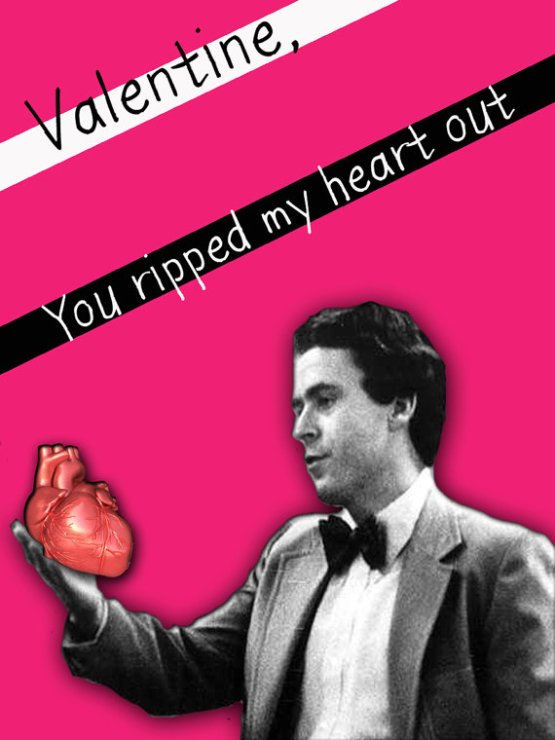 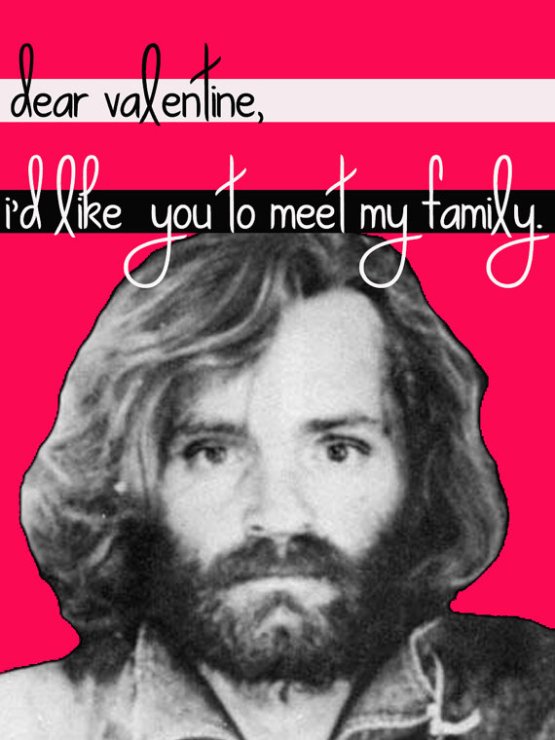 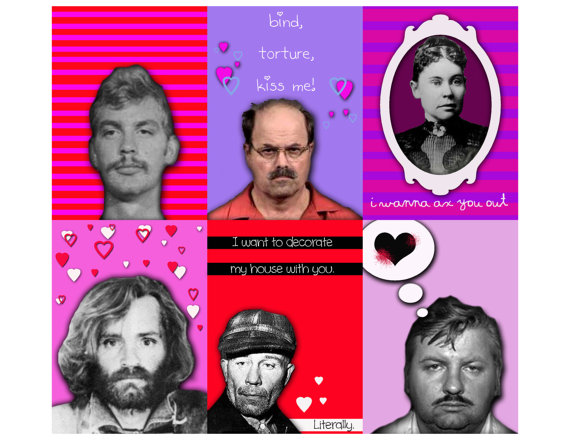 Of course, this is not even close to all the cards on the Etsy site. Calling herself “the Anti-Hallmark,” NonComposCards also has Christmas cards, and even Birthday cards available. Of course, being as Valentine’s Day is this week, you might have to get something from an actual Hallmark, because I somehow doubt these would arrive on time.. [unless you happen to live extremely close to the creator] The real question is: would You buy any/all of these cards for Your loved one? Why or why not? Let me know over in the comment section! Be sure to also follow me over on my Facebook page! [we’re at over 180+ likes – let’s get to 200!] By clicking that “like” button, you’ll see every post from warrenisweird the very moment it’s been “gone live” online; and I also share links to articles and pictures/videos that will not be featured here on the blog. So go follow over there too! Every “like” helps me a ton, giving me the ability to write more posts for you to read, so be sure to tell the horror enthusiast in your life to do the same, and share The Facebook Page with your family and friends!

I’ve also been writing way more reviews on my Letterboxd account, this is because I’m trying to review every single movie I watch  – with each review [usually] posted the very next day after viewing! Are you interested yet? Check me out over there and click that “follow” button! I’m just bound to follow you back because I like reading other people’s thoughts on film, as well as writing reviews myself!

*NOTE: Because of the time of year, I have been working a lot more lately [four, sometimes five, days a week – all day] because this is the time that Colleges/Universities begin sending out acceptance letters. With this in mind, I am – unfortunately – not as available to write a new post every second day like I did when I started warrenisweird. I feel that I should share this information because I have been asked why I seem to disappear from here for almost weeks at a time. If wanted, let me know in the comments, and I can write a more detailed/explanatory post*

The movie opens on a bright and sunny day, where one grade 12 student’s happy life soon changes.. While attempting to avoid what appears to be a blood soaked person walking in the middle of the road, Brent swerves his car around a tree, which ultimately ends with the accident killing his father. Unfortunately, Brent is constantly confronted by the guilt of his father’s death [and his mother’s emotional collapse] after the accident, so Brent escapes life with drugs and loud metal music to block out the pain and guilt he feels. However, he has one thing holding him to Earth; his girlfriend Holly – a grounded, caring, and loving individual with good looks; a perfect dream date for his high school prom…and then there’s a ‘special’ girl, known as Lola. Lola is quiet and awkward, but seems to actually have feelings for Brent: a lot of feelings. So many in fact, that she asks Brent if she’d go to the prom with her; which he politely turns down. [seeing as he’d be going with Holly] and that – that’s where it everything goes terribly wrong.

As it turns out, Lola is fucking crazy – making Brent the ‘Prom King’ at her own version of the prom, which includes: [but not limited to] a mirrored disco ball, pink satin, glitter, syringes, nails, and even power drills! The worst part is knowing that her father is involved with her torturous ways.. even helping her! Unfortunately, Lola thinks she’s doing something perfectly fine, and you learn that this isn’t the first time she done this – remember when I mentioned the blood soaked individual at the beginning? As it turns out, he was one of Lola‘s [many] “LOVED ONES”. The movie can feel like a slow burner at times, which isn’t a bad thing, but holy crap does it pay off nearing the end! With enough blood/gore to satisfy most horror fans, the quality of this film is insane! 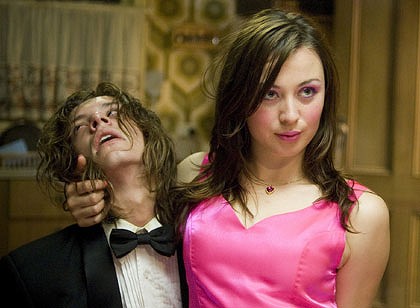 the real problem is how attractive Lola is..

In the end though, I titled The Loved Ones as the perfect Valentine’s Day movie – and this is why: It’s not. In truth, it’s extreme, violent, and definitely a beautifully crafted film. The closest thing that could be considered “loving” about this movie is Lola‘s dedication to Brent and the other men she’s tortured, and ultimately – killed. It’s a wonder that Brent survived at the end, with obvious permanent memories of what he just went through: and Lola, who tries so damn hard to catch up to Brent when he makes his escape..when this happens. [spoilers, obviously]

So be sure to check out The Loved Ones this Valentine’s Day; with it’s slow burning story – which as I said, is not a bad thing – and an attractive [but psychotic] Lola, what could possibly go wrong? Would you go to Prom with her? I mean, if it meant your life..

“Hell hath no fury like a woman scorned”, am I right?